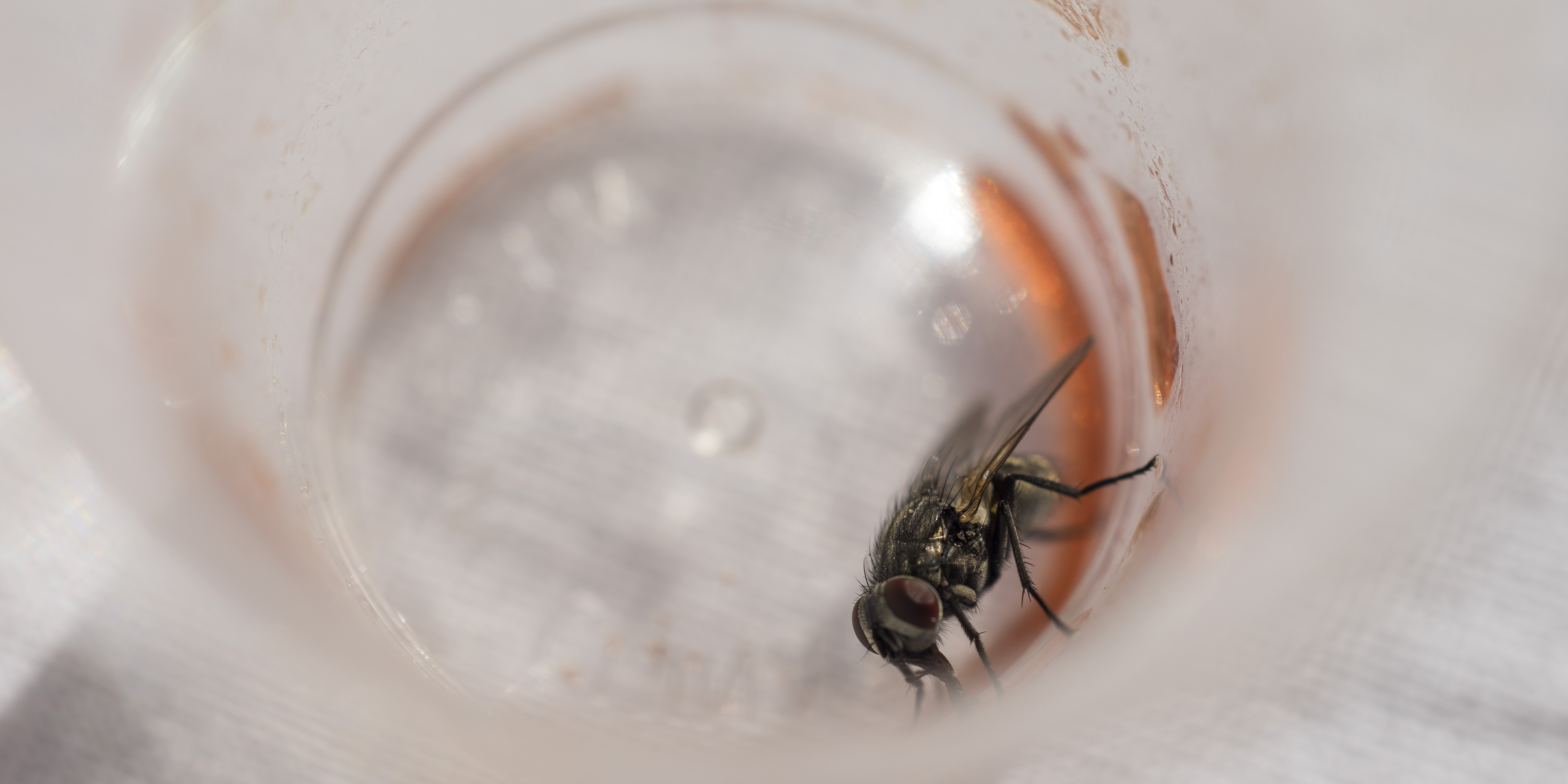 This post is a companion piece to The Last Supper photo series.

“I am here to answer all your communion cup questions,” announces Eric Melzer. His review[1] of Broadman’s 1000 Plastic Disposable Cups confirms that “Yes, these are reusable (but that’s gross. Just throw them away, they are cheap)”. 41 out of 45 agree – along with every pro-Pasteur[2] pastor – that hygiene matters most.[3] But if the term ‘reuse’ is too germ-laden, the more idiomatic ‘we recycle’ remains relevant, at least in Canada. I observe (leaning forward in my pew) that at the bottom of every ritual sip is a familiar logo – the sign and seal[4] of three arrows in a closed loop – and I wonder whether redemption itself could be recyclable.

Given the usual fruits of curiosity,[5] it might have been safer[6] to leave these cups in the Blue Box, along with their divine/dramaturgical dregs.[7] But for me the practice I grew up knowing as the “Lord’s Supper” has become newly pregnant with provocative questions. For its power to elicit, the ritual and its offshoots have my enduring respect. I see potential in rearranging these gleaned elements to further understanding, if not the possibility for (re)birth. Beyond the task of salvaging (the leftovers of) ingrained religious vocabulary, my aesthetic practice is a collage of experiences: conceptual and formal bricolage.[8]

With the Protestant imagination having thoroughly distanced[9] itself from the (mass) ontology of transubstantiation, it is perhaps not surprising that Marshall McLuhan’s “medium is the message” – set as it is against the Catholic backdrop of “the wine is the blood” – should gain little traction among Calvinists. While Peters frames this as “looking for negation, the ‘is not’ that sets things back on their dialectical feet,”[10] I’m tempted, as Keats might be, to call it an “irritable reaching after fact.”[11] In fact I harbour irritable reaching(s) of my own. Marshalling them should be interesting.

As a child tasked with washing dishes, my soap bubble castles were (kindly) scorned as inefficient distraction: but to me they remain the essential point (and clean cutlery the byproduct). More recently,[12] I found in countertop grime a productive vocabulary for psychological messiness. A housemate’s bacon grease, left overnight, became raw material for intergalactic planetary photo-collage.[13] While enduring contempt for my passive aggressive arrangement of communal dirty dishes (out in the sun), my peculiar gratitude for mouldy applesauce was on the whole appreciated. Having thus freely framed the profane as sacred; it occurred to me that the reverse is (at least as) available for lens-based scrutiny. While the sun shines on the righteous and the wicked alike,[14] sunlight goes on refracting fruitfully through cracked plastic and communion dregs. Our (Jungian) shadows already coexist with our saintly halos: and such, it seems, is the constitution of bodies whether or not they are present at The Last Supper.

Present or not, we might all reckon more fully with exclusion and embrace.[15] Whether or not a multiverse cosmology[16] appeals to us, our trajectory as a species has been one in which we have grown steadily smaller. “Ours is not the only sun”, leads naturally to “ours is not the only galaxy”. As for the universe? If eternity is indeed “set in the human heart,”[17] the invitation remains open towards a wider circle of compassion.[18] This kind of widening gyre of moral awareness has been articulated in terms of an ever increasing circle of empathy.[19]

If, however, our individual and communal consciousness at all resembles a balloon, then empathy too reaches a breaking point. Being thus situated within the bounds of particular parameters (plasticity, tensile strength, patriarchy, tedium, etc.) we inevitably accommodate the given resources that we (and they) enjoy. If I find myself playing with sand, chances are I’m dealing with (the healthy parameters of) a sandbox.[20] But containment might as easily prompt fear, as in Theoden’s outburst at Helm’s deep: “I fret in this prison”. Inhabiting as I do, a kind of fringe Christian belonging, I find myself more creatively engaged with questions of us-and-them, and more pointedly with the question “who are we?” In church, I thus observe the ritual, but covertly, by making observations: a kind of anti-abstinence as a mode of asking.

How might I fruitfully break the Brechtian fourth wall as a footnote to overturned money tables?[21] Might the blowing of trumpets remain a viable option?[22] Haven’t our flying (theological) buttresses always been pretentious? What becomes of hospitality when we build fences[23] around a meal? How porous (from the point of view of refugees) ought we make our boundaries for inclusion? Does privilege itself collapse as something to aspire to when the possibility of sharing (it) is systemically negated? Are we predisposed to a disposable disposition? Where is the fine line between self-examination and narcissism? How does the imperative “take, eat, remember and believe” echo in a consumerist chamber? Who ultimately benefits from the global production and consumption of religion? What ethically awkward supply chain undergirds the reluctance of religion to admit of its own manufacture? What (heteronormative) gender and power constructions remain in effect when (ritual) tables are set and cleared? What might it mean, given these considerations, to insist on “doing the dishes”? Might we also find ways to do them together? What divisions of labour and systems of capital are foregrounded (and implicitly celebrated and reinforced) in these ritual elements? How do the performative aspects of religion reify broader patterns of consumption? Where, embedded as we are in (supply) chains of being, might we find an adequate vantage point? Does abstinence (only) apply to the designated driver? What if I discover that I am, after all, among the “liars and backbiters”[24] advised to decline the cup? What enduring poetics of grace remain for which to be grateful?

Downstream from the church Blue Box, plastic communion cups come full circle. Sheep and goats notwithstanding, they are inevitably separated from glass and metal, by what I picture[25] as an enormous mechanical winnowing fork.[26] But I also note with Moira Welsh, that “Ontario’s recycling scraps are being shipped to Asia at a rate of thousands of tonnes a month.”[27] The MADE IN CHINA mantra may well anticipate MELTED IN CHINA, a homecoming ironically summarized by the recycling logo itself. It is at best an awkward gratitude, that affirms workers (en)framed[28] by huge factories sorting through our detritus: at least they enjoy (an adequate?) salary on which to live. Geographically, the ship-breaking yards of Bangladesh,[29] are far off, but I remain implicated.

My half-baked, half-situated, unsolicited solidarity, is in the refusal of a meal ticket, though hungry; and though desiring to belong, in the eschewing of the safety of a fence. Weak in and weak out, I do hope that it’s a sincere nod towards Jesus’ own artful self-emptying. I retain, too, a nostalgic romance for The Gleaners. Millet’s somber earth-tones seem almost comically optimistic in the dust-wake of the sixty-foot-wide harvester[30] responsible for my breakfast. But if for the dogs there are crumbs,[31] there may very well be dregs of communion wine for the (Lord of the) Flies. People do seem to trust each other more when they’ve had something to drink: and in this trickle of light, the dirge and dance bleed together, along with John Milbank and Leonard Cohen’s diverse reasons[32] for the ongoing suspension of (dis)belief and the ringing of (church) bells.

The Last Supper is on view at you me gallery (330 James Street North, Hamilton) from January 8th 2016 until February 7th 2016, as part of tactictactic, an exhibit featuring the new media work of artist/scholars in Communications and New Media at McMaster University.

[1] I have no connection to Melzer, or to Fresh Life Church in Kalispell, Montana, where he serves as Technical Arts Director. His Amazon review is available here: http://www.amazon.com/review/R2BNGJ53Z3LETJ/

[2] Louis Pasteur usefully pointed out that microorganisms (not miasma) lay at the root of disease.

[3] While this is a point of gratitude, the persistence of vaccine-denial and creationism remain troubling.

[4] For a covenantal perspective on this, see http://www.ligonier.org/learn/devotionals/signs-and-seals/

[8] On the Claude Lévi-Strauss, continuum, I’m often more of an engineer than a bricoleur.

[9] Protestant othering of the mass as an “accursed idolatry” endures in confessional contexts. See, for example, The Heidelberg Catechism, as adapted for the Book of Praise: Anglo Genevan Psalter, page 546.

[15] Though not necessarily as understood by Miroslav Volf in his book Exclusion & Embrace.

[16] As espoused by Lawrence Krauss and others.

[18] I have not personally signed Karen Armstrong’s Compassion Charter, but do note it here as a point of interest.

[22] It was arguably quite successful in Jericho.

[23] The concern of “fencing the table” remains a site for debate in many communities, giving new meaning to the phrase “You hem me in behind and before”.

[24] Further pithy labels for the excluded are to be found in the Form for the Celebration of the Lord’s Supper, a contemporary adaptation of a 16th century liturgical text by Polish Reformer Jan Łaski, still employed in liturgy today. See, for example, Book of Praise: Anglo Genevan Psalter, page 604.

[25] Perhaps with a little imaginative help from Hieronymous Bosch’s The Last Judgement.

[28] We may “(en)frame” this (term) in terms of Heidegger’s use of it in The Question Concerning Technology.

[29] As notably documented by Jennifer Baichwal and Ed Burtynsky in Manufactured Landscapes (2009).

[30] I note in this connection the MidWest Durus Premium 60: https://www.youtube.com/watch?v=Ls412TYP9JE

[32] While Cohen’s advice to “Ring the bells that still can ring” is melancholic, John Milbank’s enthusiasm remains grounded in allegiance to the church as a carrier of a liturgical imaginary.