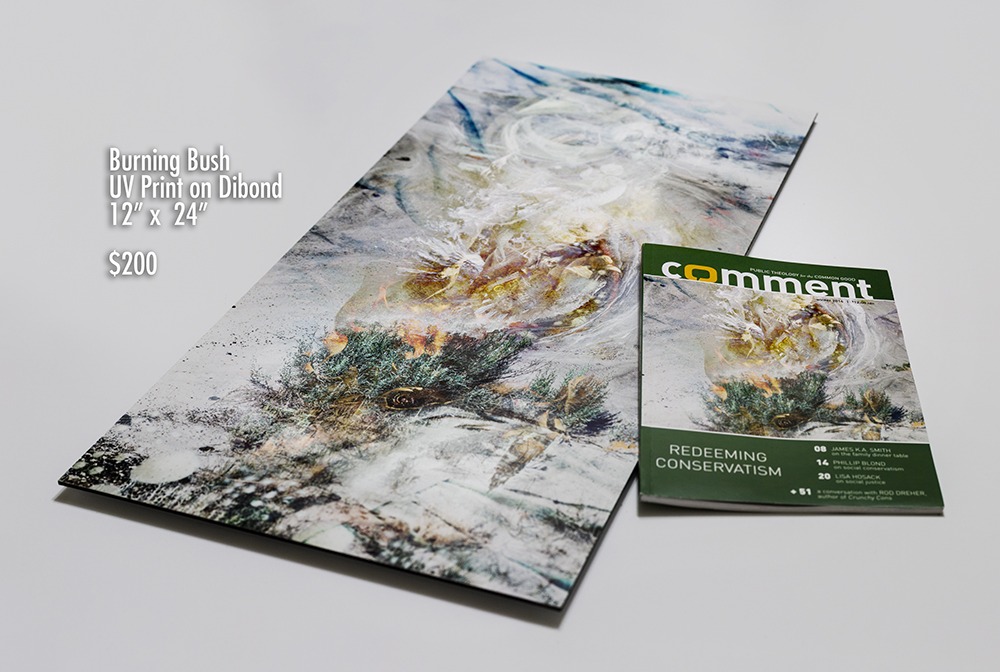 If you’re familiar with Cardus, you’ll have come across an issue or two of Comment magazine, which in its Winter 2014 incarnation features my work, Burning Bush on the front cover. Here’s the image in print adjacent to its aluminum counterpart. Does “Redeeming Conservatism” sound a bit heavy? It does to me. But if, as James K. A. Smith asserts, “there is something worth conserving“, then I hope my own reflections (from the issue’s back cover) also conserve an element of whimsy:

Artemisia Cana, integral to steppe ecosystems, is an institution. Timeless erosion-stopper and tireless nourisher of desert creatures, the benevolent ubiquity of Silver Sage is topped only by grey hair. Scathed by the fires of colonization and drought (but persevering anyway), he’s a resilient ascetic: one who drinks from deep roots; a keeper of the good; a bush not consumed. And yet the plains bison (though similarly hoary and conservative) did not fare as well under fire, succumbing to the herd mentality of lowercase (armed) sages on horseback. Now a mere 300, reintroduced of late to Saskatchewan’s grasslands, smoulder in a mythic wild. As the zealous smoke clears away, a calf cavorts in the dust, raising new plumes of questions, quite possibly prophetic. Parks Canada is well funded. Does there remain, even now, a song to sing, to the tune of “do not destroy”? Take off your shoes. We’re going to stay here a while.

If you’re still tracking, this is as much a game of eye-spy as ever. Silver sage is easy enough to spot, but for those wondering where the buffalo appear in this image, I’ve taken this opportunity to clarify. In the inset image below, I’ve isolated one of many layers in this photo-collage. It’s the layer that includes buffalo skulls, here used as a painterly device to create flames. In the final version, they’ve faded away, much like the creatures themselves.

Burning Bush is one of several works that resulted from a trans-Canada research trip I made in the summer of 2012. While it was first shown as part of my solo exhibit, LANDSCRAPES, at the you me gallery in February 2013, the work has been the locus of several other conversations.

Especially memorable to me was the acceptance of Burning Bush into the inaugural exhibition of O Ma Noot Gallery’s at Beth Jacob Synagogue. Rabbi Dan Selzberg, had initial (understandable) reservations about the appearance of the word(s) “EV-AN-GE-LIUM” visible in appropriated stained glass at the core of the bush’s burning. Rather than provoke, however, the image became a point of departure for further reflection and conversation. The theme of the show, “…and you shall tell your children” resonated with me as it was oft repeated during my own upbringing albeit in a non-Jewish context. We discovered that we shared in common a commitment to the wellbeing of the next generation, and an awareness of the importance of (religious) institutions in making that covenant concrete.

Since exhibiting the work again at Glenhyrst in 2014, I’ve continued to wrestle with the tensions in the work. How could I possibly justify the bringing together of tree roots along the Seine, inverted parliament buildings, injection-moulded footwear, and a map of Manitoulin island? Are these really my own stories to tell? Can I own an idea, simply by having crossed paths with it? Shouldn’t I rather defer to someone like Jane Ash Poitras, whose Cree heritage gives her more of a right than I’ll ever have to speak about the buffalo in terms of genocide? How can I even begin to speak when the entire image-borne story is so latent with perpetrated loss? On a recent visit with my brother to the Royal Ontario Museum, I was struck by the power and looseness of Poitras’ collage works. She says: “I think that the role of an artist today is to become free, to transcend. Then they can transform, enlighten, and become empowered.” These words ring true for me, but in ways that I haven’t yet unearthed. I often feel only a palpable lack of awareness.

What I keep coming back to is the open, curious nature of collage. It seems to be a place not only to juxtapose, but to collaborate: an imagined landscape where new languages can be invented and word games can be played without apology. Scissors and glue will always remain charged with the institutional memory of more insidious weapons. But if we move ahead as collaborators, we just might begin to collage together a future.

You can buy prints of Burning Bush.

Zoom in (use your scroll wheel):