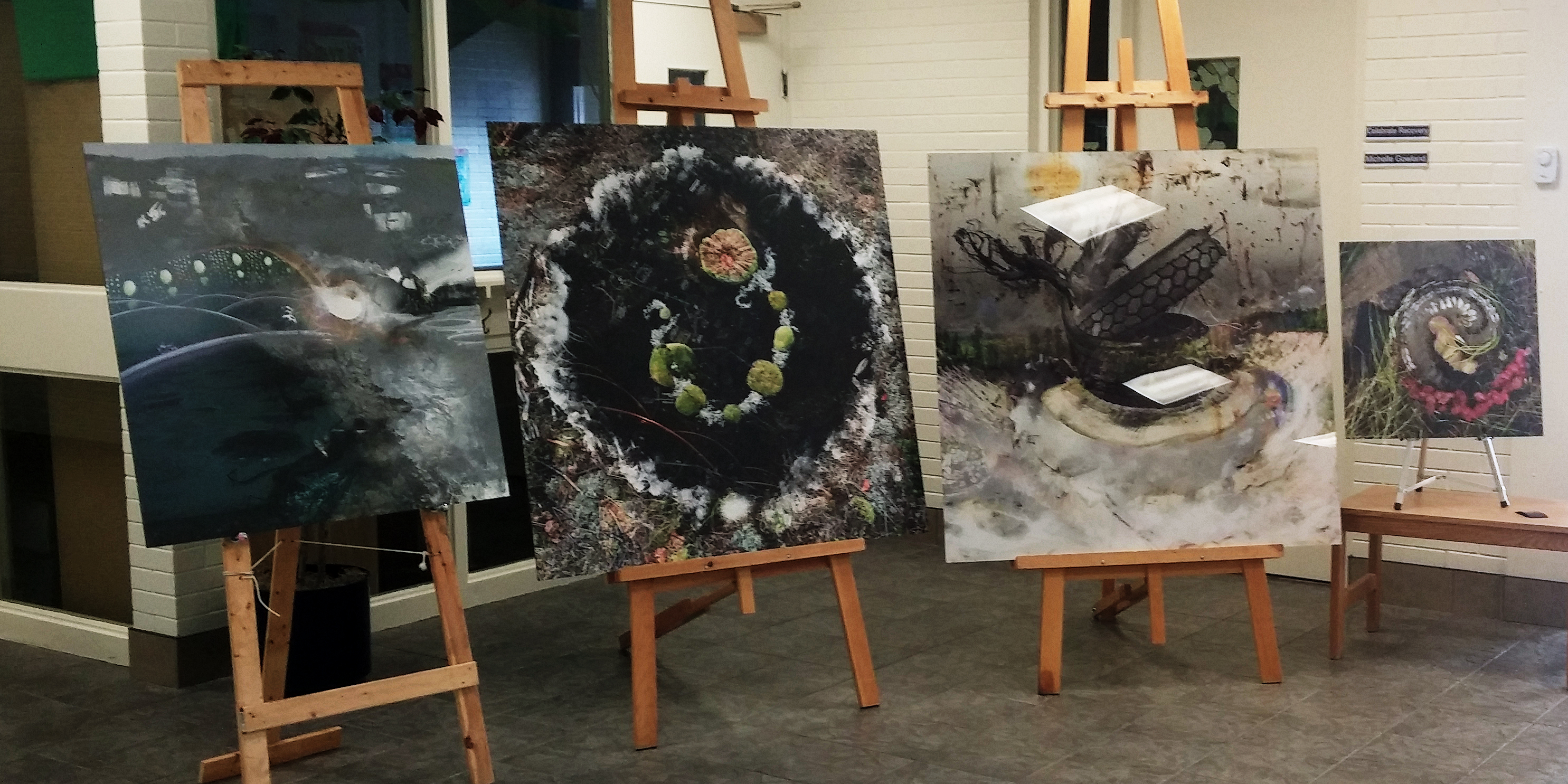 On the heels of Scrapin’ the Wasteland, Stephen (my gracious host) introduced me and my work to more people in his Waterloo neighbourhood. One of those people is David Knight, a pastor at Lincoln Road Chapel. In addition to having written a fabulous book about water in the Bible, David recently hosted the seminar Our Father’s World: Discovering the Hidden Holy in Creation, featuring keynote Ed Brown, from Care of Creation. He also invited me to exhibit my artwork.

Hope, in the arena of human environmental impact, is scarce. So I figured this would be a great moment to reflect, in a Christian context, on how we’re not simply fated to be destroyers and eroders of the earth, but also people who uphold creation though creativity. I decided to bring along a series of works (shown on easels, above) that address the complex interweave of humans with their environment. Helping me with the setup was Aimie, who also happened to express most strongly the kind of connection we were forging:

Your pieces express a strikingly poignant message. I would encourage you to display them.  At the risk of overusing the word poignant, I do believe that they capture the essence of what this conference is about.

Probably my most eco-oriented piece continues to be “Meander” a 4-foot square montage that coerces together the Big East River (at Arrowhead park) with an assemblage of truck tire pieces, gathered from the Michigan Interstate. I observed again the relevance of the river’s insight: even though the forces of erosion are destructive, they also carve out new possibilities. I apply this to the environment in this sense: even while our burning of fossil fuels continues to ravage the air and the water, it also makes possible the meeting of the kinds of creative forces that will eventually solve the problems we face. It’s not a self evident beauty, but it is a hopeful one, and that’s where I have to rest my confidence.

Ed Brown’s seminar went into statistics about overpopulation and the dramatic negative effects of human ambition on the climate. Fear, of course, is rarely sufficient as a catalyst for action. It helps, therefore, to speak the language of the particular community you want to mobilize. As it happens, Christianese does not easily play host to ecological concerns. There’s a long history in Christendom of environmental neglect. Thankfully there are plenty of exceptions, such as this ecumenical formulation from the late 1990s, which can only be described as repentance:

Biblical statements, such as “to have dominion” and “subdue the earth”, have been misused through the centuries to justify destructive actions toward the created order. As we repent of this violation, we accept the biblical teaching that people, created in the image of God, have a special responsibility as servants in reflecting God’s creating and sustaining love, to care for creation and to live in harmony with it.

What Brown essentially did was to make Creation Care a gospel issue. If our relationship with God and others is to be healed in Jesus, then so too must be our relational configuration with the creation itself. Amen.

Also present at the conference was A Rocha Canada, a boreal manifestation of a broader environmental stewardship network. As it happened Peter Scholtens (a former teacher from my High School days) has been involved with A Rocha for years. Great to discover that the world is still small!