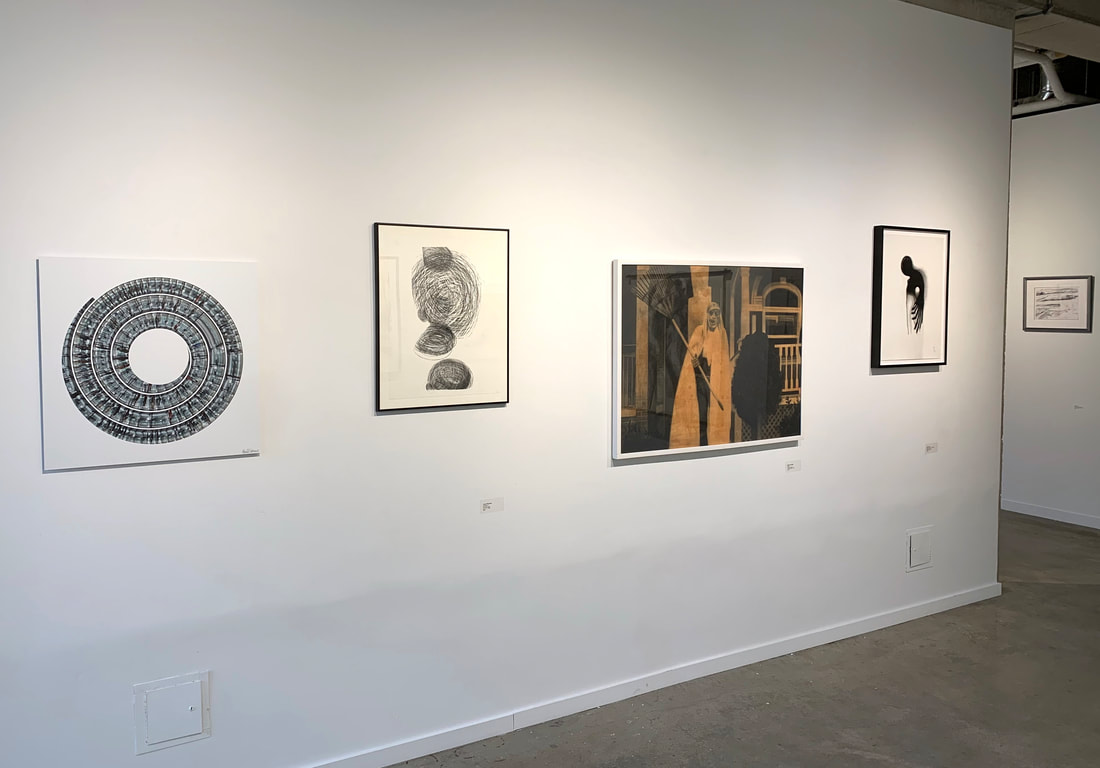 I was grateful to participate in Drawing Unlimited, a recent juried show at Propeller Gallery. My work, Revolve Face, was accepted into the show despite not involving pencils or paper, or really any semblance of traditional drawing materials at all. Evidently the jurors (Keijo Tapanainen and Joseph Muscat) were serious about their published call to “stretch the boundaries of the medium”. Equally serious was the corresponding question “In what sense is [Revolve Face] a drawing?” posed to me repeatedly both in person, and online (see, for example, Hugh Alcock’s ARTORONTO review).

Truth be told, I wonder the same thing myself. Does my digital practice really belong here? While impostor syndrome can threaten to make one defensive, my hope is to keep the conversation going. What might be gained from framing an ostensible non-drawing as a drawing after all? I have no interest in insisting, but rather in wondering out loud, what if? This line of questioning proves productive.

Draw near and wonder: how might we “stretch the boundaries of the medium” in 2020? Does drawing know any bounds? The edge of the page? The density of charcoal? The surfaces I traverse are as virtual as they are tactile. Consider the sidewalk: the grit of it in winter, the sparkle of sprinkled salt, the determination of the groundskeeper. Her “drawings” are original. And mine? As tricky as algorithms are, mine are merely drawings of attention. Or are they? What do digital traces of human traversals really constitute? The drawing of conclusions is another boundless matter.

-Me, wondering out loud

Definitions
Among the many definitions of drawing I discovered through the show, was a gem that Lisa Johnson dug up for us, that drawing was “to put a line around an idea”. I can’t recall if it was Matisse or someone else who said it, but I do like the freedom in this definition to imagine drawing as a conceptual terrain. I wonder if perhaps the inverse is also workable: drawing as a way “to put an idea around a line”.

Drawing as Markmaking
Before we get too abstract, however, it seems important recall the basics. Playful language and conceptual play aside, isn’t drawing still fundamentally about markmaking? Yes I think so! And implicit here is the maker of the mark, as well as the surface on which the mark is made. Considered as markmaking, drawing involves a body leaving a trace on a surface.

The Surface
So let’s start with the surface. What qualifies paper or wood or papyrus or silicon as a ‘valid’ substrate? Could the sidewalk itself suffice? Could a drawing also have a virtual surface? The screen of a smartphone perhaps? (Picture greasy fingerprints) Or the digital landscape of social media itself?

The Mark
And what about the “marks” in a drawing? How intangible is a mark ‘allowed’ to be? Could they be made in invisible ink? How subtle must an impression become before it is disqualified? Or does it have to do with “artist intent”? Are footprints in the snow sufficient? Judging by the fierce determination of pedestrians, I have to imagine them as being laden with agency.

The Body
And the body? Perhaps it all begins with the body. We all leave subtle traces everywhere we go, peculiar to the wobble of our own particular flesh: whether on stilts or on wheels; whether largely grounded, or in acrobatic aerial fashion. Drawn lines of presence can be strong, as the scent of perfume that follows a pop star across the paper of her stage, as shimmery as the silvery trail of a snail, or as impermanent as the wake left by a sailboat.

Your whole life is a drawing, your entire journey a series of GPS coordinates, your story, a gathering of marks made on a pale blue dot.

Considered thus, how might our collective human “drawings” be represented? How might we draw attention to human traces, habits and movements: to the patterns and processes of people?

Drawing as Flattery
Traditional drawings do this by mimicking with the hand what the we already do with a wider set of limbs, and what the natural world also does with her own often flailing arms. It happens when the artist’s brush depicts a rainstorm with rapid diagonals. It can also happen by way of inspiration, as when the frilled edges of a cloud are echoed in the delicate hand and the subtle soft touch of quality conte. Imitation is flattery.

Drawing Water
But now I come now to another sense of the word drawing: drawing as pulling, or carrying; drawing in the sense of drawing water. I am thinking here especially about how our attention is drawn. In the drawing of attention, the mind is drawn (pulled, carried, dragged, scraped) across the surface of awareness, propelled by the impetus of experience.

Drawings of Attention
In drawings of attention, lines are traced by lived experience onto the blank pages of consciousness and memory. But the mind is fickle. Could such drawings of attention be made to feel permanent? How might we make-permanent our awareness of such abstract mental markmaking?

Digital Tools
I feel privileged to be alive at a time when we can address such questions with the support of digital tools. These tools help to mediate between the silos of traditional media. While not entirely friction-free, Painting, Drawing, Sculpture, Performance, Video Art, and more can now coexist in a more-or-less peaceable partnership. What once was strictly motion based practice, makes its way back into a drawing show. It is in the overlap of media that exciting things begin to happen. With these assumptions in tow, Revolve Face also works to draw attention to the “drawings” of shoppers tracing their way into and out of the Eaton Centre, the capitalist temple at Young and Dundas in Toronto.

Videos and Algorithms
Digital tools help us trace human activity, record their movement through space, and capture latent patterns in their habits. These manifest as varying emphases of flow and shifting visual weight. I think of these tools as offering new ways of seeing, and new ways of drawing attention. Whether they come or go, these shoppers all face the future. It’s a side effect of swapping the time and space axes.

The Process / Making-of
The making of Revolve Face involves the following general process:

Mixing Media
Perhaps the best way to stretch the boundaries of drawing is to apply its categories, language, assumptions, and logic to the forms of other disciplines. And then the question of whether it is a drawing or is not a drawing may still be asked, but the question also gives way to other questions that we might find to be more curious. If the methods and the madness intrigue you, check out the additional works in the Traversals collection.