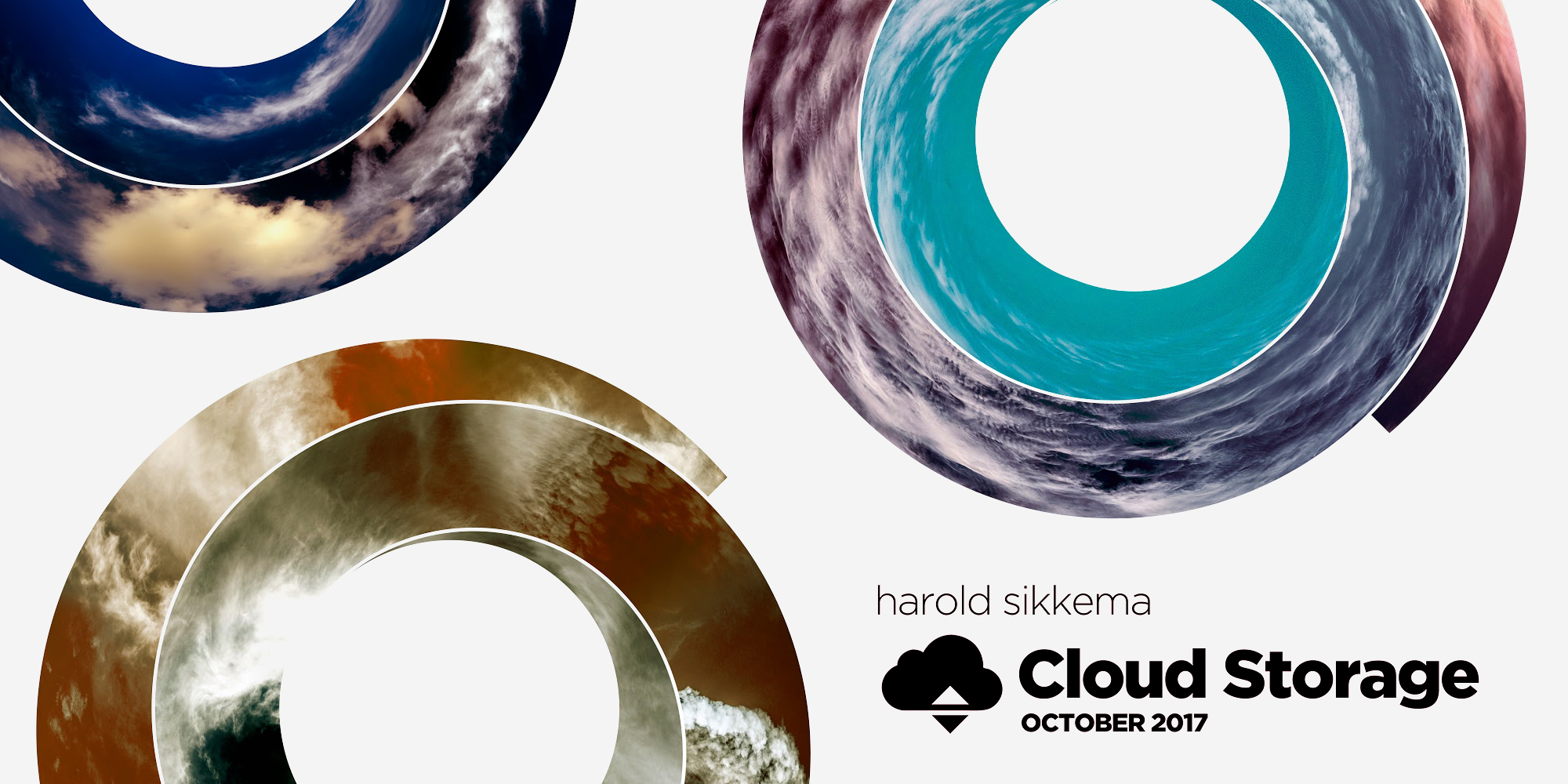 I’m pleased to introduce a new body of work, entitled “Cloud Storage” at Gallery4 at the Hamilton Public Library in October 2017.

Cloud Storage consists of long panoramic images that have been digitally rolled into compact spirals. Compared to the long panels of eight feet that I’m accustomed to, this format is much easier to transport. But for me, exploring the sky has also opened up another form of transport: the kind synonymous with enchantment. In this arena I’ve found plenty of precedent. From the popular hymn, It Is Well With My Soul, in which the sky is apocalyptically “rolled back as a scroll”, to the rolling up of the world in a magical, highly adhesive ball in the Katamari Damacy video game, there’s enough spinach to build on. There are also shadowy patches in these skies, giving rise to wonderings about which way is up, and whether there’s anything beyond our carbon emissions. But there is also an urge here to play. It’s an open source whimsy, concocted with JavaScript and Photoshop. I’ll be releasing the script online this month, so you can make spirals of your own. Shirts and prints are also a possibility. And now, let’s have a poem, shall we?

Cloud Storage
So you need a place to catalog your thoughts?
Some suitcase space for your inner sky?
(Sc)roll up!
There’s plenty of spiraling air upside the horizon for all that panoramic pizzazz.
Being mostly water yourself, you’ll feel right at home among the clouds.
So board a nimbus ship and billow.
Upload your consciousness and float.
Evaporate into a sky tank, and hover, like a lazy vat, adrift in the wispy mist: a pirate pareidolia.

Feeling a little nebulous?
A little spaced-out?
You’re a Dropbox now, at maximum capacity: a storehouse for hail.
And the (Google) driving wind now urges you to
“please upgrade your storage plan”,
Or else offload a terabyte to other terra-firma(ment)s:
A Swiss cloud bank perhaps, or a microburst download
Raining data into rivers, bittorrents burgeoning,
lamenting lack of bandwidth,
churning hydro-electric politics,
all the way down to the ocean
where we ostensibly become one again with the whirled,
nevertheless yet waiting for municipal flood recovery funding
to finally trickle in.

She floats under her own dome of heaven,
shrouded in her own London fog,
or her very own Amsterdam pea soup fog: a murky sinus sky of “snerwt”.
But when her head cold subsides,
she shelves her clouded mind on a shelf cloud,
rides an updraft to cloud nine,
transcends the eddies, learns to fly
to the cerulean, to the azure, to the construct:
to that bottomless blue where
JMW Turner yearns for a (java)scripted sublimity.
Pixels paint their way home, exhausted by air travel,
crystalized into contrails, conspiring with windsheer, to stretch feathery jets westward.
Cirrus aviaticus goes on reigning in the sky in the fickle confines of the pale blue dot,
but the climate also shifts by digital degrees:
dialed in by the gradations of a hue slider in Photoshop.